A few month’s ago we celebrated my brother’s 40th birthday.  I never in a million years thought we would celebrate that day.  I didn’t think he’d be alive.

My brother is an alcoholic and an addict.  He has a long history of drug and, more specifically, alcohol abuse.  And just for the record, I have his permission to talk about this stuff.

He spent a few different periods of his life living on the streets of Salt Lake City.  He was homeless.  He was making choices that lead to this situation.  We, his family, couldn’t force him to choose otherwise.  And because of those choices, he was not allowed to live with any of us.  It was awful.  For everyone involved.  I won’t go into details right now because that’s not really the point for writing this.

He spent some of the time sleeping at the Road Home.  Some of the time he slept on people’s couches.  “Friends”, I guess.  Sometimes he was at the VOA (Volunteers of America).  Other times he slept in fields, the mountains, the side of the road.  Wherever he passed out sometimes.

And during many of those periods, he panhandled for money.  At grocery stores, on the streets, at trax, in parking lots. 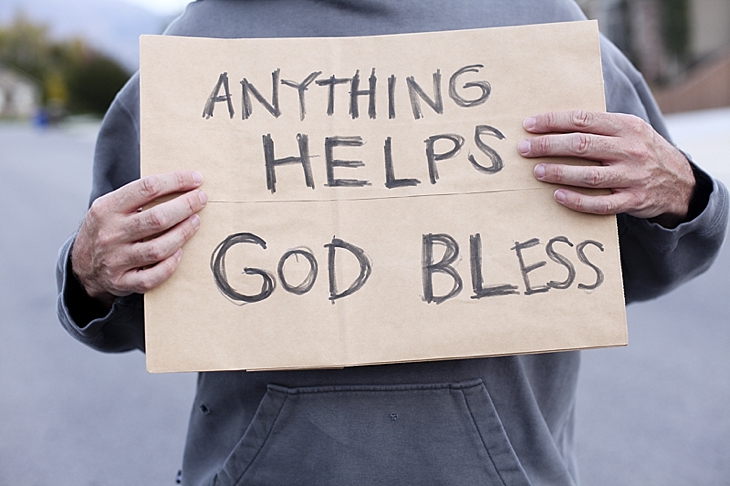 Our family got pretty good at not giving him money.  Because we knew exactly what he’d use it for. And because we were doing all that “tough love” stuff in hopes it would compel him to make better life choices.  That whole tough love thing was NOT easy for our family.  It was horrific, really.

So when he asked for money on the streets, he was the stereotypical person who begged for money, then turned right around and used that money to buy drugs and alcohol.  He WAS the person people don’t want to give money to because they assume you’ll use it to drink or get high.

But.  He also used that money to eat.  And buy socks.  And a coat.  And a backpack to hold his few meager belongings.  And other seemingly small things.  But those things are what kept him alive.  Other people kept my brother alive when we couldn’t.  We didn’t even know if keeping him alive was the right goal.  Sounds awful to even say that, but it’s the truth.  Anyone who has dealt with addiction on a personal level knows exactly what I’m talking about.  It’s one of the most hopeless situations a person and family can be in. 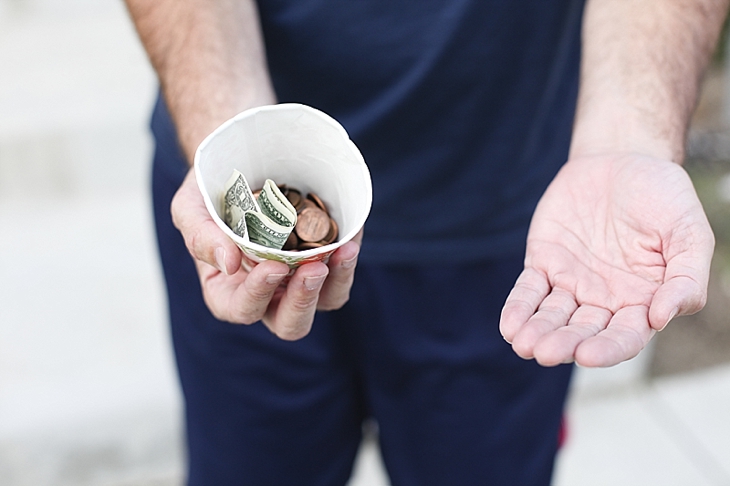 During one of our many conversations about my brother’s life on the streets, he said to me “The worst part about asking people for money is they acted like you didn’t even exist.  They acted like they couldn’t even hear you.  And they looked right past you.  Like I wasn’t even there.  That was the worst part.  It wasn’t about them giving me money or not.  It was about them treating me like a worthless piece of shit.”  (There may or may not have been some more expletives in that statement that I chose to leave out.)

I thought a lot about that.  And started feeling pretty bad because I knew I was guilty of that very thing. Sometimes acting like those people asking for money weren’t even there.  Walking right past them without looking at them.  Hurrying past them and ignoring they’d even said anything to me.  It was awkward for me sometimes.  To deal with those people.  To not give them money because I assumed I knew what they’d use it for.  And I didn’t want to contribute to their “problem”.  (Truth is, they’ll find the money somewhere, whether you give it to them or not–addicts are very resourceful when they have to be)

And then it struck me.  It’s NOT about whether I give them money or not.  Give them money, don’t give them money.  I’m not saying one is right and one is wrong.  But I could (and should) ALWAYS treat them like a human being.  A person with a soul whose worth is as great as mine.  Instead of asking myself, “should I give them money?” I ask myself “how should I treat this person?”

My brother was hit by a car after stumbling into the road while drunk.  He was life-flighted (not his first time on a life-flight) and in the ICU for 3 weeks, the hospital for 5 weeks.  (You can read the blog we kept while he was in the hospital right here).  He has now been sober for roughly 2 years.  After nearly 20 years of hard core alcohol and drug abuse, he is sober (for various reasons, including a traumatic brain injury).  And people who gave him money, and treated him like a soul of worth, and took care of him at the VOA and Salvation Army, and sheltered him at the Road Home helped keep him alive.

His life is not all sunshine and roses even now that he’s sober.  20 years of uncontrollable alcohol abuse doesn’t just disappear.  And he can still be a complete pain in the ass.  But he’s alive.  And our family wasn’t the only ones who helped keep him alive (though we fought tooth and nail to do that for him).

And I am grateful for that.  Because he’s my brother.  And he’s my parents son.  And he has a good heart.  And he’s taught me more about human compassion and being non-judgmental, and seeing the value and worth in every human soul, than any other person on this earth.

So now when I see someone asking for money on the side of the road, or at a stoplight, or the freeway offramp, or by temple square downtown I always try to remember that is someone’s brother, sister, mother, father, aunt, uncle, grandma, niece, nephew, son, or daughter.  Someone cares about that person.  Someone’s world is shattered because of the choices that person made.  Someone, somewhere, loves that person and wishes with all their heart that person wasn’t out begging for money.  And God loves that person JUST AS MUCH as he loves me.

It’s not about giving or not giving money.  It’s about seeing every human being the way God sees them.  And treating them accordingly.

{Side note.  I am FULLY aware that some panhandlers do it as a “business”.  And some panhandlers are rude and entitled and not very kind people.  There is a WIDE variety of reasons people are asking for money on the street.  I hope we can all be sensitive to those many and varied reasons.  And not lump them all into one pool of people.  And be grateful we’re not the ones asking for the money.  And I want to emphasize I’m not professing whether or not people should give money.  More than anything, I wrote this post for my kids.  To help show them the need for human compassion and love.  I am in NO WAY trying to start a debate on giving money to panhandlers.  Just so we’re clear on that before people light me up in the comment section}

42 thoughts on “To Give or Not To Give money to the homeless. That’s not really the question.”